It’s been a bit since I posted, I’m now onto my journey into the wonderful world of XNA development for the xbox…w00t. Ran through the 3D and 2D tutorials and it’s been a blast so far. So I decided it’s time and what better way to learn then to start working towards some goals. A Hexagonal Turn-Based Strategy game written the ground up in C# on the XNA framework…big talks, but not out of the realm of possibility. While kicking around a few ideas with a couple of buddies, I think I’ve stumbled upon the way to make this work. 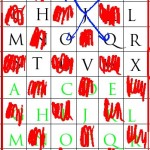 So while this approach may be suited for checkers or chess, I would only allow your avatar four directions to move in, not six. 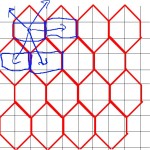 Figure B Hex
So then I tried the hex approach, but quickly learned this would be a pain in the butt to keep track of in code. Yes this would be the most ‘true’ representation of a 6-sided diamond shape, but still not quite what I was looking for.

Ah humble QBERT! Yes, QBERT is the cheese. So while the map will be visually show hexes the logic for movement is still based on a 2d grid system. 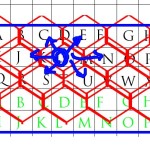 Ok so I think I figured it out!

Draw the tiles so they overlap and then null out the in betweens.

So if you are standing on L then you could potentially move NW, NE, E, SE, SW, or W.

The logic would be something like get current position in x, y. the possible movements would then be:

Does that sound sane? I think so! Now I just have to do some coding to try it out!